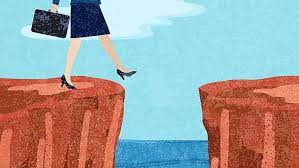 Simply put, the Glass Cliff is the cousin of the Glass Ceiling – the metaphor for the societal barrier that inhibits women from achieving the highest positions in business, politics, and organizations.

This effect is a very subtle form of gender discrimination that also limits workplace diversity as well as women’s ability to become successful leaders.

So, women are elevated to positions of power when things are going poorly – and therefore have a higher likelihood of failure, meaning there’s a greater risk for them to fall. Sometimes these situations work out, and the women put in charge are successful in orchestrating a turnaround and righting the ship. Often, however, they don’t.

The term was first coined by psychologists Michelle Ryan and Alex Haslam. It was a result of research findings which was in response to a blistering U.K. Times article that said after analysing statistics of 100 companies on the London Stock Exchange, business boards that featured women were more likely to be underperforming. Ryan and Haslam took a closer look at the numbers and discovered that the reason for low numbers is because women were only placed on boards when companies were underperforming, not because women were less capable than men.

Since it was first named, the glass cliff has attracted considerable interest outside academia. In the initial reports on the phenomenon, it was common for media to share key research findings by elaborating on the career histories of women who had faced glass cliffs. Early examples were Carly Fiorina, appointed CEO of Hewlett Packard as the Tech bubble burst and Margaret Thatcher who faced a series of crises in her rise through UK politics.

Let’s take the example of HP.

Carly Fiorina was appointed CEO at Hewlett-Packard and was known as a transformational leader who would take the company in a new direction after its low performance. She was able to jump stock prices up 6.5 per cent until the dot-com bubble burst. At one point she pursued a controversial merger, but became embroiled with board member Walter Hewlett and was subsequently fired. After her removal, the Hewlett-Packard board acknowledged that her merger would have been the right decision!

How do Companies benefit?

Now here’s how it works out. If the woman fails, the company is labeled as being progressive and is then free to replace her with a man. If she succeeds, the company is better off and may even take credit for appointing the right person for the job.

Why do women take these roles up?

Because even with the high chance of failure, a glass cliff position can be difficult to turn down because leadership roles are so infrequently offered to women.

And, women often struggle when they’re placed on a glass cliff. That’s because there is a serious lack of mentors in the workforce, and this gets coupled with barriers for them to access the ‘old boys’ club (An informal network of connections through which men use their positions of influence by providing favors and information to help other men).

Strategic networking is one of the most common methods for moving up in the world of business. This is where the phrase “It’s now what you know, it’s who you know” originates. Women cannot do this without networking with men and seeking out men as mentors. But women aren’t always welcome in these informal social networks so they miss out on these connections.

While the term glass cliff typically refers to the obstacles that women face, the term is increasingly being used to also refer to challenges that minority groups face when they are promoted to leadership roles in the workplace.

How Can Women Avoid a Glass Cliff?

Companies need to have measures in place to make sure that women and minorities in senior leadership positions have all of the resources they need to be successful. The onus is really on organizations and Boards to prevent this phenomenon from happening and/or recurring. The best practice entails organizations zeroing in on women-specific leadership development tracks.

💲 Negotiate your salary: More precarious the position, more should be the salary. Men negotiate 4 times the salary a woman doesn’t.

🎯 Define performance standard: At the time of accepting the position, understand the criteria for success. Have a discussion with the Board and see what’s achievable.

💡 Use your inherent qualities to your advantage: Women are ranked higher in EI, better problem solvers and more inspiring.

👨🏿‍🤝‍👨🏿 Build a network/community: Have trusted colleagues across all departments.

🎨 Walk away if required: if you feel it is too risky. An ousted woman CEO is seldom able to stage a comeback. Men don’t seem to have that problem.

✅25% of women CEO’s are targeted by active investors

✅Only 4.8% of the world’s top companies are led by women

What are your views on this phenomenon? Please do share in comments.

If you want to know what more you can do to disrupt this as a woman, or have adequate measures in place as an organization, let’s talk: