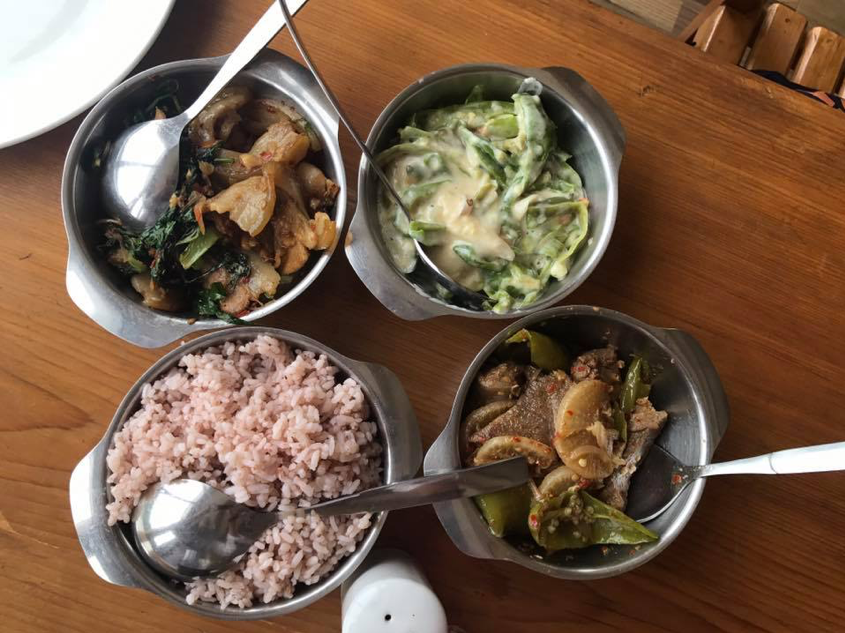 Far, far away in a mystical land, I stood at the base of a majestic mountain bracing myself for an arduous climb to ‘the top of the world’ – the ‘Tigers Nest ‘(Taktsang Monastery) in Bhutan. As per local lore, the monastery was the meditation site of an Eighth century Buddhist master ‘Padmasambhava’ (Guru Rinpoche) which means ‘he who came into being in a Lotus’. The temple complex is an overhang overlooking the ‘Paro valley’ 10,000 ft above sea level and about 3000 ft higher than the base I was standing at. Two women carrying on a trek by themselves did not invite much attention along the way – this was a safe Country. We had been advised by the guide to don well covered clothing and specially have tops with sleeves to have entry to the Monastery.  It was a 13 km trek one way. We passed some travelers on the way and good-naturedly greeted them with a ‘hello’. Doing this in the humdrum of the city life in India’s commercial capital city of Gurgaon would have been viewed with suspicion!

I was overwhelmed by the sheer beauty of nature around – the fragrance from the Pine trees when the wind blew gently, the rhododendron bushes bursting with blooms and nodding with the wind, the Sun streaming through tree tops, the forest all quiet, and, the faint melodious sound of a stream gurgling somewhere around – enough to captivate one’s senses.  We got lost twice as there were no signage or guides and there was no one around. We had deigned to ride up on the Mules thinking we would take one from the midpoint. Initially being in the forest was a bit eerie and the thought that nobody could reach me there (no phone signals) was worrying but as I walked I started reflecting on the whole journey into the country in the last few days. The unplanned digital detox was very welcome !

So, Bhutan – The Land of The Thunder Dragon – lived up to its mystery and charm. The last few days I had been driven around – Thimpu with the huge 51 m Golden Buddha (Buddha Dordenema), The Chortens (A place that gives insight to Buddhist living through Arts and Paintings) at Dochula, the outrageously beautiful Punakha valley, the giant prayer wheels at the picturesque Chimi Lakhang, the temples at Haa Valley and then to Paro to go back to our World. The breadth of cultural experience ranged from a homestay in Thimpu with delicious home cooked local meals like Ema  Datshi (Chillies and cheese), red rice, pork and beef preparations and local bread with soup to venturing out to one of the bars in the night, thanks to having a friend posted there and experiencing local coffee beer and a great band belting out everything from  UB 40 to Justin Bieber!

Sudden weather changes are a norm all the time. It is best to carry a rain jacket with you all the time. And that’s the thing about Bhutan – expect the unexpected. The only sore point in entire trip was the stay at some of the places the food was just awful. Conveying that to the management was a task by itself. Anyways, one learns to develop more patience. I must add here that this entire trip made me a lot more patient that I usually am  – relying on body language and speaking slowly to ensure that the other person has heard and understood what you have said is quite a project. Most of the people were humble, well-mannered and had a modest livelihood.

Reminiscing thus I arrived at the midway point only to discover that there were no mule rides permitted further on. So we had to carry on with the trek on foot.

Throughout Bhutan the countryside is dotted with prayer flags and prayer wheels and so it was here. The Bhutanese put prayer wheels and flags near rivers because they believe that the moving water will help take the prayers along to those who need them and often move the prayer wheel itself. The last leg up is a series of stone steps that initially go down a chasm and then finally up. Now I could see a lot of people around as this path was the only approach.

I grabbed on to the handrails and started climbing and stop short at the sight of a waterfall cascading down a good 60 metres into a pool beneath a bridge. I notice many ‘tsatsas’ on the way – small stupa shaped clay statues – one can expect lovely vistas all around.

We arrive at the Monastery entrance and our additional belongings are deposited before we enter the temples. There are in actual three main temples – all filled with gigantic paintings. The Altar room has the bronze Padmasambhava along with his eight manifestations and an array of offerings. The butter lamp room has dozens of butter lamps burning to honor lost loved ones. The butter lamps are lit in all the monasteries in front of the altar and the sight is quite moving. We move silently around. The Monk in the altar room (he spoke fluent English) explained about Compassion to me beautifully -It starts with simple acts he said and the foremost is to love oneself – ‘start by being kind to yourself’, ‘Love yourself and then love others. Pray for the well -being of all. Do simple acts of kindness daily’. Words of wisdom that I recollect from time to time.

When I stepped out from the Monastery again, I had a birds eye view of the vista in front of me – miles of lush green rolling hills in the backdrop. I had stepped out into calmness and serenity. Though there were so many people around every one was admiring the beauty in silence and walking around in awe.

The downward descent was done with reluctance and was faster. We had lunch at the midway point – limited choices and overpriced menu. For all its simplicity Bhutan too is commercialized to an extent. Overall, I felt that the destination is certainly a goal but it is the journey that counts. My curiosity about the customs and history led to new learnings and discoveries and gave me an entirely new perspective different from what I thought it was. Bhutan is the only country which has a Gross Happiness index. The Bhutanese have a strong ownership about their Country’s culture and it is conveyed respectfully to all tourists. The extent of lengths to preserve the ancient traditions whilst availing modern technology is a perfect marriage between the past and the present.  Discipline is on the forefront in Bhutan. People actually give pedestrians the right to cross the road. People are connected to spirituality – it is a way of life. Bhutan is not just a different landscape, it’s another world, it IS magic.